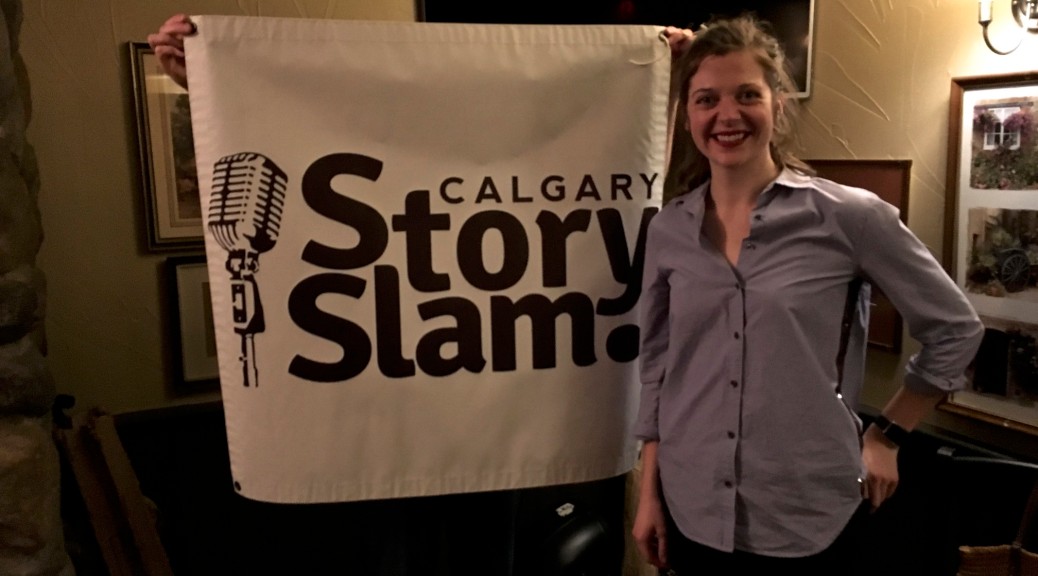 Have you ever heard of a Story Slam? It is when a bunch of people get together and tell stories to each other. Rad, right?! You can imagine my excitement when I found out about the Story Slam that takes place at the Rose & Crown on 4th St. SW. every two months. We arrived and put our $5 in the bucket. On Thursdays, the Rose & Crown has half priced bottles of wine, so it was clear to Ryan and I what we would be ordering. We learned that each Story Slam has a different theme and this evening’s theme was: Oops! There is room for twelve storytellers who must tell their mostly true, themed story within the five minute time limit, or risk losing points. The host of the evening reminded us that this is supposed to be a fun, competition free evening, but that there is a prize at the end.

The storytellers began. We heard a story about a woman peeing in a forest, a man whose junior high jazz band career ended just as soon as it began, and a man whose childhood bike story includes a plywood jump, a rock, and a gin & tonic. A man told us about his trip to Indonesia ending with too many drugs and an epic, Frogger-like run across a highway, and a woman told us about the time her son was gifted, by a homeless man straight out of a dumpster, a bong, which is now a vase on her mantle. We heard from a woman who once spent an entire first date discussing preparations for a zombie apocalypse in Calgary, and we heard a story from a woman who was temporarily stranded on a Panamanian island after entrusting a sketchy captain with her passport. We heard about a man who was caught sober skinny dipping by a policeman who was surprised only to find out he wasn’t drinking, a mother who made the mistake of buying her kids the same winter Splasher suits as every other kid in school, and last but not least, a woman whose drunkest evening had her trespassing on the train tracks, being kicked out of Cowboys, and breaking a few laws, BEFORE 10pm!

The evening was over. I could have sat and listened to stories all night! The scores were tallied up and the winner was the mom who now has a bong from a dumpster holding flowers on her mantle. Then I asked the host about the idea for the slam and where it came from. “Poetry can sometimes be esoteric”, she said, “but anyone can be a storyteller.”

The Story Slam usually takes place once every two months, but they will be holding Story Slams in May AND June! For more information, check out the Facebook page! Thanks for the stories, Calgary!