Off to Pub Street. I asked my new hostel friend, Cory where it was and how far we had to walk to get there. He pointed ahead and said, “it’s just up there!” I looked, and sure enough, there was a huge, flashing, neon sign that said PUB STREET, with huge, flashing, neon arrows pointing down the road. “Oh,” I said, “you mean just there where the giant neon sign and flashing arrows is?” 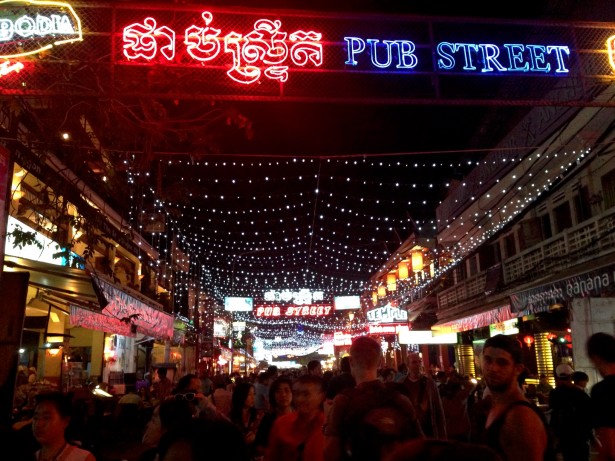 I guess pub street is known for the street parties. We have heard a few different times about the dancing, the drinking, the mingling, and the general partying that does down on the street. I saw no such thing. No general partying. The street was empty! We walked down the middle of the road and found ourselves between two bars— “Angkor What?” and… another one. Standing between the two bars, my friend Emma and I found ourselves in a sweet spot of music. You know when you drive across a border and you can kind of jump from one place to the next, or straddle over two states or provinces? It was like that. But with music. One step to the left, and it was one song, one to the right, and it was a different song, with no hint of the other. I imagined what it would be like to have the ability to see sound waves. Just huge waves clashing in the middle of the street and bouncing back from whence they came, creating a sound wave wall, and two sound wave tornados. Anyway, Emma and I started dancing. I imagine we looked like rockstars as we danced. There may be a meme of us on the internet soon. First, a picture of Beyoncé that says, “how I imagine I look when I start street parties in Siem Reap” next, a picture of the two of us, unshowered, unkempt, and uninhibited dancing alone in the middle of a street- “how I actually look when I start street parties in Siem Reap.” 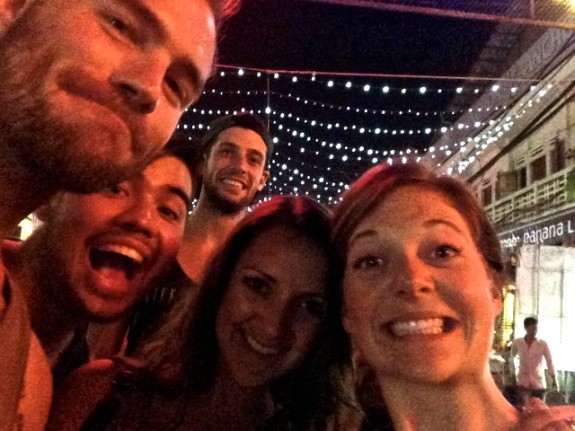 It wasn’t our dancing that gathered the crowd, or our devilish good looks. I’m 100% sure it was our persistence. A few songs played and we didn’t stop. A full circle of people gathered around us, mostly Chinese, smiling, clapping, and all of them filming. Woohoo YouTube sensations. Finally, a Korean man stepped into the circle. A high waisted khaki pant, tucked in polo shirt wearing, fanny pack toting, ‘if I tuck my pants into my white sweat socks it will really bring my outfit together’ Korean man. He danced and danced. It was phenomenal. After he joined, the party began. People began to copy whatever dance moves he was doing. It was like a makeshift flash mob. Epic!

After a night out back home, it’s common practice to buy a donair, McDonalds, pizza, maybe even poutine. In Cambodia, however, the western places don’t stay open. In my slightly drunken state, I bought a bag of fried and salted beetles for the equivalent of about $0.50. They weren’t actually half bad.