I have traveled around the world, and when people find out I am from Calgary, Canada they ask me two things: Where the F is that? and Do you ski or snowboard? In fact, dear reader, I do not ski or snowboard, but not for a lack of trying on my parents’ part. When I was a kid, they really encouraged me to love skiing, taking my sister and I out to the mountains on weekends. Then, when I realized I may look cooler on a snowboard, they enrolled me in lessons. My sister remembers those lessons ending with a quick trip down the hill on the medic’s snowmobile for me. Needless to say, this was one horse I was not tempted to get back on. I would live my entire teenage life feeling a bit left out when my friends went out to the mountains on ski trips, but I came up with all sorts of excuses— too expensive, I don’t want to slow my friends down, I have no gear, etc.

I was recently inspired to try snowboarding again. I was inspired to challenge myself to try something (somewhat) new, and something I thought I would be bad at. I signed up for the three evening beginner’s snowboard lessons at Canada Olympic Park.

On day one, I was full of the craziest concoction of fear and excitement! Fear that I would be the only adult in a beginner’s class, fear that I would fall and break my neck, fear that I would look uncool. Excited that I may actually like it, excited that I may be kind of good at it! I picked up my board and boots from the rental shop, and headed out to the hill. As I walked by the chairlift, I shuddered. Flashbacks of the panic I once felt loading and unloading from the chair haunted me. I found my way to the meeting point and found my instructor, Alexander. He introduced himself and the 14 year old girl sitting next to him. The others joined us, and I was pleased to find out I was not the oldest person in my group. We began the lessons with basics— how to hold the board, how to tighten the bindings, how to put the snowboard on the snow so it doesn’t slide down the hill. We hopped on the magic carpet (the more fun way to say ‘conveyor belt’), and head up the bunny hill. The first few runs were a success! I felt stable and confident. I didn’t fall once! And of course, as soon as I said that aloud to Gavin, one of the other beginners, I lost balance and fell, on the carpet, going uphill. The 8 year old skier behind me laughed her ass off.

Day two had breezy beginnings. We did a few warm up runs down the bunny hill, and Alexander took us through some basic heel edge stuff. I wobbled down the hill, nervous about the speed I picked up as I went. Meanwhile, the under-12 Sunshine Racing group FLEW past me. Our evening ended with the chairlift. I confessed to Gavin how nervous I was. He laughed, not entirely sure why I would be so scared. I boarded the chair with ease and I didn’t even fall while unloading! Success! The 14 year old girl in my class was boasting and bragging that she was at the hill all day, and she had been on the chairlift “like, so many times” already. I told her I couldn’t come to the hill because I worked all day. She said, “it sucks to be an adult.” When the lesson was over, she complained that she couldn’t stay because her mom was there to pick her up. I said, “Oh, too bad you can’t drive yourself. Sucks to be a kid. Plus, I’m going to eat chocolate cake for dinner because I’m an adult and I can do whatever I want.” In hindsight, I shouldn’t have let a 14 year old get under my skin so easily.

Day three felt amazing. It was the culmination of all the little tips and tricks Alexander had been giving us the last two nights. I only fell once getting off the chairlift, face first, and had to army crawl out of the way to safety. We worked on our edge swapping, and began fine tuning our skills. I was actually getting the hang of it, successfully snaking my way down the hill.

If you had told me a week ago that I would be successfully edge swapping, excited to get on a chairlift, and looking forward to the next time I go snowboarding, I would have laughed right in your face and called you a dirty liar. But look at me now! I challenged myself to try something new, something I thought I would be bad at, and I feel like a million bucks. 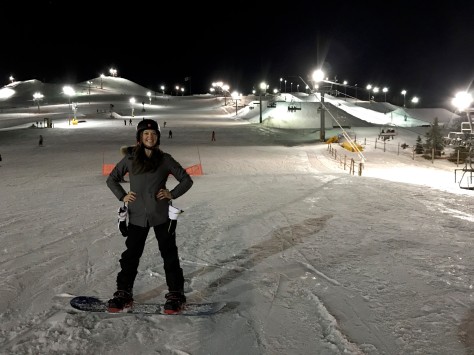