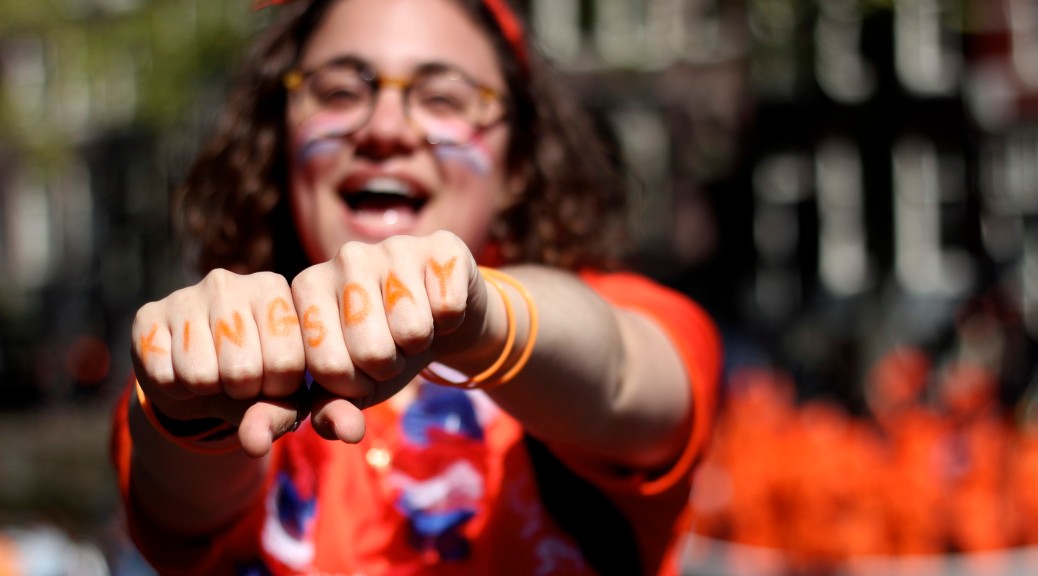 This morning I woke up with a spring in my step! It’s King’s day!! Koningsdag!! The biggest birthday party in the world!! I donned my orange feather boa and my orange feathery crown. We hit the streets and wandered through Haarlemmerstraat. It was packed to the brim! People (in orange) walked along the street shoulder to shoulder. Little stalls set up on the sidewalks with kids selling lemonade, parents selling old clothes, toys, and other various items. Music was playing around every corner, and not one face was frowning. It was wonderful!

We saw boat after boat filled with orange people. There was one boat in particular carrying only boys all wearing orange onesies, orange afro wigs, and orange sunglasses. They were quite a spectacle! We figured it was a good time to stop and have some lunch. We sat on the canal edge, with our feet dangling over, and ate our snacks. We watched the boats go by and laughed at the characters on each. One boat looked like a giant floating dance floor! One boat that went by set off a confetti cannon!! It was magical and wonderful! I think confetti cannons are up there among a few of my favourite things.

We found ourselves at the stage on Westerstraat and danced to the awesome music they played. We were dancing with two guys dressed in big, furry, orange onesies. I laughed at them. Over their shoulders, I could see a third and a fourth dressed in the same outfit. Then a fifth and sixth. Then a seventh. Sally said, “there are SO many of them wearing that onesie!” I laughed as I looked around at the sea of furry, orange men. I looked over at the buildings surrounding and there was one window in particular that made me smile. There were four older ladies dancing at the window and taking part in the fun! it was so fantastic to see them dancing along to the tunes, cheers’ing their drinks to each other, and looking like they were having such a good time.

We decided to call it a day and head home. We sat on my rooftop balcony for about an hour, directly in the sun. I could have fallen asleep right then. I think everyone could have. MY goodness I’m tired! And SO happy with my King’s Day. Happy Birthday, King!