There is always so much to do on a Saturday night in Calgary. The Saturday night activity seekers know this. They go find a rad DJ playing sick tunes and dance the night away, or they head to one of the many bars in the city with their pals, and have a drink or two, or maybe they want to take in live music, theatre, or comedy show at one of the many venues in the city. But I ask those people this: why, fair Saturday night activity seekers, choose only one activity, when you could go somewhere and do all three?!

On Saturday, November 19, Calgary welcomed, with open arms and legs, the hilariously vulgar, and borderline offensive comedian, Margaret Cho, and the fine folks at Arts Commons threw a wild pre-show party to whet the appetites of the audience. What you are about to read contains stories of female musicians singing about scissoring, drag queens and their ‘tucks,’ the funky fresh stylings of a funky DJ, and a whole bunch of dick jokes. Please be advised that this blog post, much like the live show, contains mature content. Audience discretion is advised. 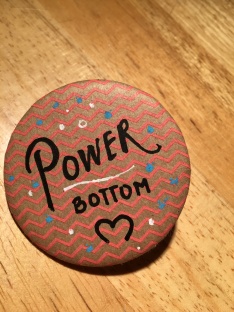 The Wrong Kind of Girls opened the pre-show. They are “Canada’s preeminent queer-feminist-ukulele comedy band” (Check out their website). The songs they sang were hilarious, poking fun at tropes and stereotypes surrounding sexuality, making fun of awkward moments in and out of the bedroom, and even had scissors to demonstrate with! I bought another glass of wine when their set was over. On my way to the bar, I passed Lyndon Navalta, an artist currently in residence at Arts Commons, making buttons for people. ‘Cheeky Buttons’ they were called, and cheeky they were! Folks walked away from his table proudly sporting buttons on their lapels— “saucy bitch” and “power bottom.”

The music became louder and I turned my attention back to the stage. The Imperial Sovereign Court of the Chinook Arch was introduced. Four drag queens, who towered over the audience in their 6-inch stilettos, took turns on stage, lip syncing for their lives, dancing, posing, even cartwheeling. I stood there in awe, just marvelling at the quality and persistence of their master tucks. 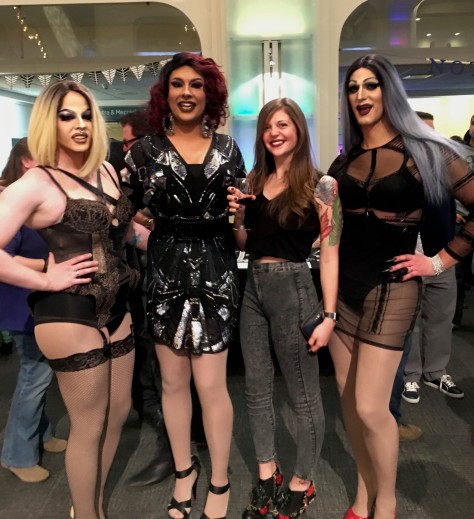 Last, but not least, DJ Donna Dada brought the pre-party to a funky close with some tunes that were impossible NOT to dance to. The queens came back out and danced with the audience, people were bumping and grinding on each other: it was a party. 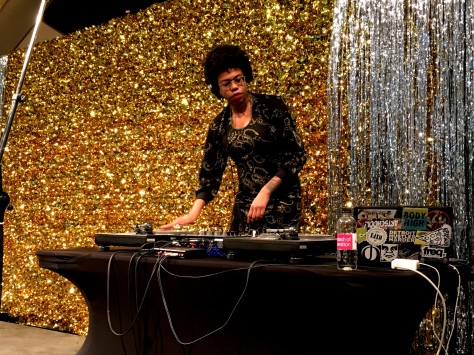 Selene Luna opened for Margaret Cho. She marched out on stage, and immediately had the audience laughing. She talked about politics, she talked about trying to have sex on a memory foam mattress, and she talked about Mexico, where she is from. My sides were splitting. Margaret Cho came out and I think my mouth was gaping open for her entire set. The jokes this woman made were racy, vulgar, and deliciously provocative. There is nothing I love more than a Korean-American woman regaling me with stories about the biggest penis she has ever seen. My face hurt from smiling and my sides hurt from laughing.

We have all heard of embroidery. Embroidery is that beautiful needle and thread-based pasttime your mother/grandma/great grandma/women on Downton Abbey did. It has recently made a bit of a comeback in the world of the hip arts-and-craftser. We have come a long way from embroidered doilies, pillowcases, and aprons though. If you search “sassy embroidery” on Etsy, you are sure to find some hilariously vulgar and confusingly sophisticated home decor. We have also all heard of the art of animation. What you may not be aware of, however, are the many different types of animation. Some know animation as big-budget Pixar movies done entirely on computers, others know it as a raunchy flip book their older sibling showed them, and some know it as the stop-motion animation film of your Barbies you tried to make as a kid. “Embroidery and animation are great,” you might be thinking, “but where the ‘F’ are you going with this, Beth?” Well let me tell you.

One fine Saturday afternoon, I found myself at the Esker Foundation with my fine friend, Natasha. We were there to take part in the Embroidermation workshop. That’s right, Embroidermation. This is the art of animation in which each frame is embroidered. Folks, we live in a world where anything is possible. We were introduced to Project Space artist, Caitlin Thompson, who took us through examples of Embroidermation, a term coined by animator Nina Paley, and I was in awe. Everything from a 5 second looping hand-stitched GIF to a full length machine-stitched music video. The music video for Tharsis Sleeps, a song by heavy metal band, Throne, was part of a cool Kickstarter project and those who donated were gifted one of the frames from the animation. Once I and every other participant picked our jaws up off the floor, Caitlin explained how the workshop would go.

Each participant was given a printed image of an animation frame Caitlin designed, a booklet with the instructions of different embroidery stitches to practice, and the instruction to stitch whatever we wanted! Total creative freedom! The printed image was of flowers, and the original animation had the flowers opening and closing. I began simply with a backstitch, and spent some time figuring out how to make lines. Caitlin explained that this stitch is perfect for words. I surprised even myself as I started to stitch legible letters to spell how I was feeling: H-O-O-R-A-Y-! I polished up a blanket stitch, a satin stitch, and a fly stitch. There I was, sitting in a direct sunbeam, chatting with Natasha, stitching away. How civilized. 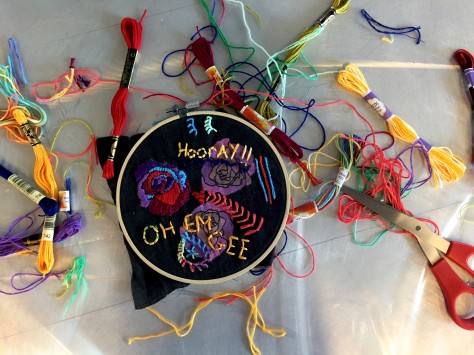 The time came for Caitlin to collect our frames and combine them to make an animation. It was absolutely bizarre and kind of hard to watch, because the stitches were totally random, but because we embroidered on top of a printed image from an already made animation, you could see the flowers in the background, opening and closing. Thanks for the Embroidermation, Esker! Thanks for the crafty day, Calgary!

The Esker Foundation has multiple workshops and events to take part in. Head to eskerfoundation.com to find out more, and sign yourself up! 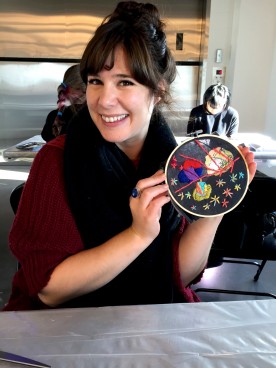