I woke up this morning at about 6:30am because the early bird catches the cheese! I rolled out of bed, grabbed an orange and a granola bar, put on clothes and head out the door. I met Rebecka, Line, Tine, and Fanny at Centraal station at 7:30. Phew it was early. It’s my own fault, it was my idea to meet this early. We caught the train and in no time, we arrived in Alkmaar! We were here to partake in the infamous Alkmaar cheese market. We wandered from the train station to the main square. On the way, we found ourselves caught up in a cluster of old people getting off a bus. They were slow moving and seemed to be creaking as they walked. We were able to outrun this gaggle of geezers and we reached the square. It was empty. I felt silly. First of all, I forced my friends to wake up SO early, and second, we dipped and ducked through that hoard of octogenarians like our lives depended on it, only to find there was no reason to rush. Line, Tine, and Fanny decided to go for a coffee, and Rebecka (bless her) and I stood in the front row, waiting for the show to begin.

It did and I couldn’t stop giggling. We were introduced to the Cheese Father, but I couldn’t figure out why he was called the Cheese Father, or what his significance was other than his orange top hat and silver cane. The 13kg wheels of gouda cheese were loaded onto cheese boards and run from the stacks to the weigh house, then back to the wagons. There were people walking around tasting, examining, and buying the cheese.

It was such a silly, hilarious event. Rebecka and I were even able to hold a wheel of cheese! We didn’t last for the entire show, because the tourists behind us were becoming very aggressive. One man kept using my shoulder to steady his camera. The woman next to me took around 300 photos. I was being pushed into the gate like I was at a rock concert. We snuck out of the crowd.

We went to the cheese museum next, so we could have a free piece of cheese, and learn a bit more about the cheese processes. After all the cheese-centric activities, the only thing missing was beer. We sat on a patio boat outside the beer museum, and enjoyed a nice, cold beer.

Today was brought to you by cheese! I just wrote “cheese” 13 times…14 if you include this sentence. 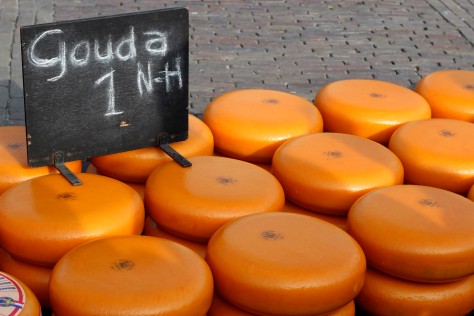