Michael and I took a vacation from van life for three weeks. In that time, we met up with my mom and dad in the Canary Islands of Spain. This is a story about the day we went up to the top of the volcano on Tenerife.

We drove up and up along the worst winding road ever. Battling motion sickness, I sat in the front seat, willing my stomach to just chill, and my gag reflex to not overreact. We had driven for about an hour, up so high into the hills, and then into clouds. We couldn’t even see the road 50m in front of us. Cars would seemingly appear out of nowhere, we couldn’t see where the road turned, only when trees stood right in front of us. We drove about 20km/hr the whole way.

And then, just as soon as they appeared, the clouds dispersed! The sky was blue blue blue, and there was not a cloud above us. The ground was dusted with snow, and the farther up we drove, the more snow we saw. We came to a clearing and saw people sledding down small hills. They used body boards as toboggans! I learned a while ago that the El Teide National Park is the most visited national park in Spain, followed by Lanzarote, and then the Picos de Europa. This meant the roads were PACKED! And not wide enough to be so busy. The parking lots were busy with Spanish drivers and people in rental cars, and of course, the snow and ice from yesterday had turned to slush in the heat of the sun today. Dang, it was hectic. We got honked at a bunch of times but we weren’t too bothered. The park was stunning. The volcano, the sky, the surroundings, all of it. You can roll your eyes all you want, silver Subaru, but nothing can get us down.

We arrived at the base of Teide and parked the car. We walked up the gondola station and found the ticket office. We went to the desk and stood behind a family. The lady at the ticket desk give them a really sympathetic look. The family turned around, disappointed, and walked away. When it was my turn, I walked up and said, “you’re sold out, aren’t you?” She nodded with the same sympathy. NOOOOO! We stood nearby and chatted about it. Mom, dad and I stood there, talking about how we didn’t need to go up anyways, that it was just as beautiful down here. Michael, on the other hand, walked over to a different ticket desk. He said he was going to ask about how to buy tickets for another day. He came back with four tickets for the cable car. They were for 4:30pm. What?! Magic Michael!

We went outside to the ticket man and asked if we could use our 4:30 tickets even though it was only 2pm. He nodded and let us go through. WHAT?! This day is magical. This volcano is magical. It wants us to go to the top. The cable car was quick, with a few stomach-in-your-mouth moments along the way. We reached the top and my, oh my. We donned our toques and gloves to fight the biting wind. The view was totally breathtaking. Or it was the altitude that was breathtaking, the volcano is higher than 3000m. We were above the clouds. Like, hundreds of metres above the clouds. The clouds gave us such a bizarre perspective, it was cool. We walked around the observation deck and took pictures. Mom pulled out the sandwiches she made for us and we sat on the wall and ate them while looking out at the whole world.

We took the cable car back down. Toques and gloves off, we walked back to the car. We wanted a close up view of the lava nearby, so we went for a quick walk through some old flow. Lava is so cool, you guys. The road through the park was stunning. More lava, older flows, huge rock formations, crazy colours, my finger on the shutter of my camera was going wild. We were above the clouds, about to go through them, and we stopped for photos. Dang, Earth, you pulled out all the stops today! 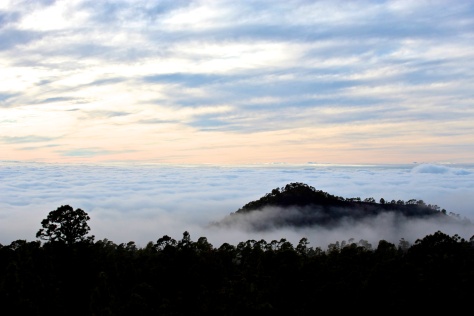 3 thoughts on “Above the Clouds on El Teide, Tenerife”